From Friday 12th August, Kerb new food market will serve up an incredible variety of street food to their Camden Lock crowd. The events and catering company Kerb was founded on the principle of enriching street life through food: the Kerb Camden market is the epitome of this core.
35 food stalls, international menus and a fully equipped bar, opened seven days a week. I went to their opening night to get lost in this food wonderland. Please find below my findings, if I was you, I wouldn’t miss it!

Almost by the entrance I was immediately captivated by the sizzling smell of fried chicken: Mother Clucker serve tea brined, buttermilk soaked, twice battered fried chicken from their converted US Army ambulance. The demand was high and the two MC members of staff did a great job by serving up to the crowd at an impressive speed. The batter was crunchy and thick, the chicken was tender and the sauce was hot and smoky – I recommend it to satisfy that fried chicken craving or to cure a hungover! 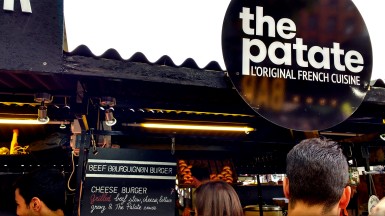 In spite of what their name might suggest, potatoes are not the piatto forte coming from this kitchen. Instead, The Patate offer an exquisite French stew in a brioche bun, topped with a French cheese of your choice. It’s as tasty as it sounds! I tried half with blue cheese and half with raclette. The raclette was a gracious compliment to the flavoursome Bourguignon, while the blue cheese took over the stage, becoming the main star of the dish – perfect for a strong palate. What a glorious idea! We are running to buy some buns for our next stew too…

Food In the Middle Roti House

I am in love with Pakistani food, and if naan is the main ingredient, I’m in! Food in the Middle‘s mouthwatering menu offers a choice of naan and fillings to create your perfect naan wrap. I went for the garlic and coriander naan with beef seek kebab. The whole experience was fascinating: the boys stretch the dough in front of you and stick it in the oven there and then. Once your naan is ready they wrap it around the scrumptious slowly cooked spiced beef, all you have to do is to dig your teeth in and let your taste buds be enticed. Combine the taste with a group of enthusiastic energetic people to serve it and your return to the Roti House is pretty much guaranteed.

When I opted for the Oyster Mushroom lunch box at Bian Dang, Tristan, the charming owner, immediately asked if I was vegetarian or if I had heard of oyster mushrooms before. I was after something tasty and veggie, after the few meaty trials above.
Yet, I don’t think the mushrooms were as meaty and compact as I expected; the rice, packed with stir fried vegetables and shitake mushroom sauce, was definitely the core of Bian Dang lunch box, with the addition of a soft boiled tea egg. A lovely lunch option for a summer day. 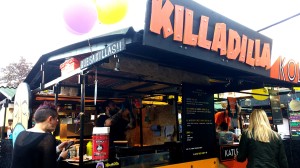 Killa Dilla
These quesadillas are totally unique, offering a real twist to the classic Mexican dish. I tried their Short Rib Dilla with kimchi, blue cheese, mozzarella and pickled grilled red onion, all served with avocado crema. Alluring concept, but the combined flavours were all too strong to find a real balance, unfortunately. If you have a strong palate, give it a go, but the blue cheese in this can be a real killa.

When it comes to street food, it is common to find steaks solutions. However, cooked to perfection medium rare steaks are, well, rare. At StakeHaus the meat really does most of the talking, with its satisfying juiciness, coupled with crunchy frites and a choice of sauces – I went for StakeHaus secret sauce. A perfect dish for a night out and a great delivery of a classic. Like they would say “If it ain’t broke, don’t fix it.”

Don’t forget the gin!
The local gin brewery Half Hitch was also one of the main players of the night, offering tastings to us curious writers and being the real spirit of the party, served in every gin tonic at the Kerb bar. Its flavour, composed by Malawian Black Tea and Calabrian Bergamot, with an additional complement of English wood, pepper and hay, is so delicate it could be sipped on its own. We recommend to give it a try when you pass by!

I would have tried if I could
When it comes to food, you cannot have it all, there is always a limit to one’s stomach capacity. 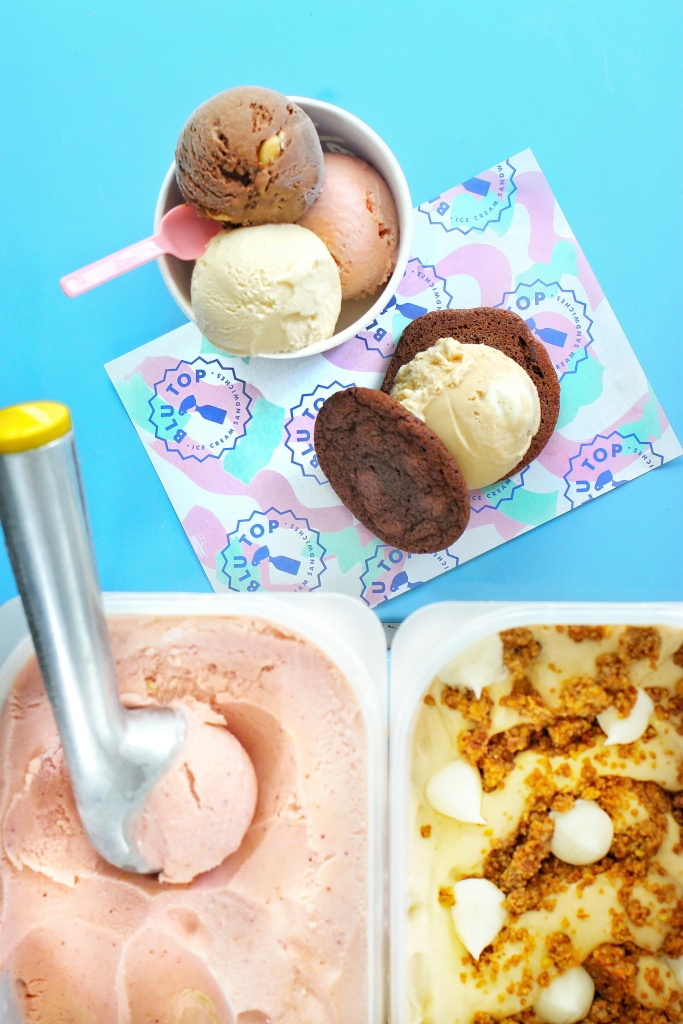 If only I could have left a little spot for dessert, I would have definitely tried an ice cream sandwich at Blu Top. The queues were never-ending there, was it so good people kept going back for more? Not far from Blu Top, the Oh My Dog hotdogs looked amazing. Are they real German sausages? I was also very curious about the Arepazo Bros menu – is theirs a real Venezuelan flavour? All I can do to find out is to go back to the Kerb Camden market and try them all. See you there!