Chinese cooking can often be at odds with a vegetarian diet (of course, there are exceptions), and that’s partly because in Asia, umami, aka the fifth taste, is just as important as your sweet and your sour. This is what made MSG such a core ingredient. This is also the taste that Clearspring‘s organic Japanese umami paste offers to provide in a form that’s much healthier and still suitable for vegans. As a fan of Clearspring’s miso, I was keen to try out their umami paste when Clearspring offered samples.

The paste comes in two flavours, ginger and chilli, and in a tube form that’s easy to squeeze and easy to store. This recipe uses the ginger version, as it’s a traditionally non-spicy dish.

Chinese style mixed vegetables isn’t really a stir-fry dish, and there are many regional variations. The main ingredient is usually wheat gluten. You can buy it in various canned forms, and the texture will be slightly different depending on which type of meat it’s trying to imitate. For this recipe, I’ve used imitation abalone.

Also, while peanuts are recommended to complete the recipe, they do make the cooking time longer, so they are listed under optional. With peanuts, the cooking time is roughly 40-50 minutes. Without reduces it by around 15 minutes. You can also add tofu to the mix to make this more protein-rich.

You’ll also need oil to start the pan and some water.

Step 1: drain the wheat gluten, add a little oil to a pan, heat the oil and once hot, add the wheat gluten and simmer on low heat. Add in the peanuts if using them. Leave on very low heat for 5 minutes.

Step 2: in the meantime, boil water to soak the daylilies and prep the other vegetables: cut the carrots into chunks roughly 1cm across, and chop the mushrooms roughly.

Step 3: add the carrots and mushrooms and turn up the heat. Add the soy sauce and sugar and stir well. Heat for an additional 5 minutes.

Step 4: add the dayliles and the umami paste. Add water until the vegetables are half covered. Simmer on low heat again for 20 minutes. 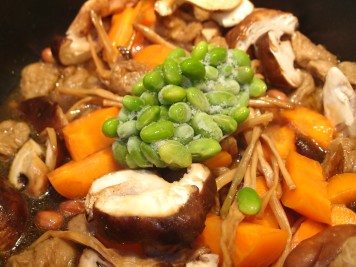 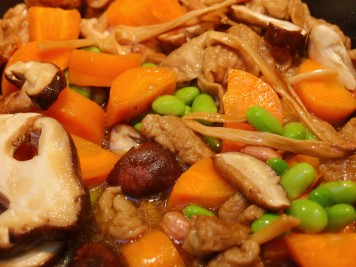 Step 5: add the edamame beans and cook for a further 10 minutes until the water is gone. Remove and it’s ready to serve!

This recipe does taste more umami with the Clearspring paste, and there is more depth to the flavour as well.

The chilli version of the paste makes a nice addition when mixing your own salad dressing. Have you tried the umami paste yet?