Skip to content
Every year the Christmas period starts a bit earlier. Fact. Isn’t it everyone’s favourite rant through the autumn months? Yet, when I received an invitation to sample the Christmas menu at Spaghetti House, I could feel nothing less than excitement. Only the mild weather at the end of September was stopping me from wearing a Christmas jumper!

When I arrive at the original Spaghetti House on Goodge Street, I don’t quite know what to expect. Also because, I admit, I had never been to a Spaghetti House before! In this same building, 61 years ago, the very first Spaghetti House was founded by two friends, Simone Lavarini and Lorenzo Fraquelli. Their motto “Spaghetti, but not on toast!” was a cheerful way to make people understand that what they were going to sample was not the canned soup they called spaghetti – but the real Italian deal. Just like that, uniting their knowledge of restaurateurs and a passion for their home food, they made a hit out of spaghetti, with queues reaching the corner of Tottenham Court Road and their joint becoming the number one Italian restaurant in London.

The greetings of the staff and the stylish but non-pretentious interiors, gives a great first impression. The culture of il saluto (lit. greeting), is so innate and cheerful that, not only is a portrait of a very important cultural detail for Italians, but it also sends good vibes to non-Italian customers.

Once I get to the second floor, it is suddenly Christmas! Decorations are set, with red ribbons around rustic rosemary vases at the table. Triumphant in the middle of the table is a panettone dressed up in red, and then a tray of panettone chunks sprinkled with icing sugar. Prosecco DOC Ca’ del Console at hand, I meet the head chef, Achille Travaglini and his two assistants, who made the atmosphere very relaxed. In Italy, when the host is cooking, it is fairly normal that guests stand in the kitchen enjoying a glass of wine and starting the party exactly at the centre of the home, il focolare, where the food is being created. Achille explains that the dinner we are about to sample is not from any region in particular. He’s chosen his favourite ingredients to resemble more or less classic Italian recipes and has given them a bit of an English twist.

The demos
After nibbling on some Nocellara del Belice olives and some mini arancini, we are invited to observe the demo of two of the available dishes on the Christmas menu.
The first dish to be demonstrated is quite a classic for Christmas – at least when the host decides to make a fish based dinner: prawn cocktail with Mary-Rose sauce and baby jem lettuce. Achille, juggling in the kitchen with his assistants, shows us his kitchen tricks. The Mary-Rose sauce should be pink, not red, so he warns to go easy on the ketchup. To make it zesty and unique, he adds some Vecchia Romagna brandy with the Worcestershire sauce and tabasco, and gives it a citrus blend by adding orange zest. The prawns, which lost their pink colour in the lemon and garlic marinade, reacquire it instantly when they get dipped and mixed in with the beautiful Salsa Rosa. But the love is all in the details. To serve this beautiful dish, Achille creates a bed of baby jem lettuce, chopped julienne style and dressed with a lemony vinaigrette. The result is a fresh, exquisite starter. Light and zesty, gentle to your palate and perfect to start the dances of a Christmas dinner! 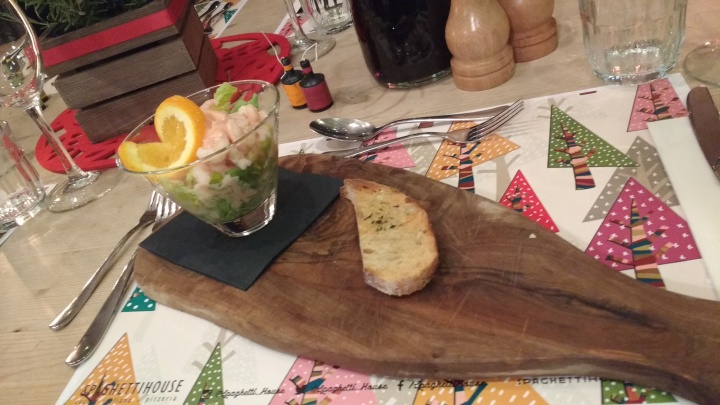 The next demo is a main dish: branzino (sea bream) fillet with a shallot sauce served with spinach and grain mustard mash. The classic potato purè (mash) in Italy has a lot less butter than here in England or in France. The idea of adding grain mustard really enriches the flavour of this classic dish, and the best thing is that it’s an easy trick that we can all do at home! To make the shallot sauce, Achille chops the shallots julienne style and fries them in a knob of butter. Then, to caramelise them, adds brown demerara sugar and white wine. As they proceed to pan fry the fish – “skin down,” as his assistant Marius warns! – they also prepare the spinach side dish, by simply frying the spinach in some melted butter. Then we watch the composition Achille layers in front of our eyes, completing it with a balsamic reduction. This dish combines a series of very simple flavours, yet it creates an addictive effect on all the guests. At this point, since we are all going crazy about the branzino, dinner is set for our extra-hungry palate! 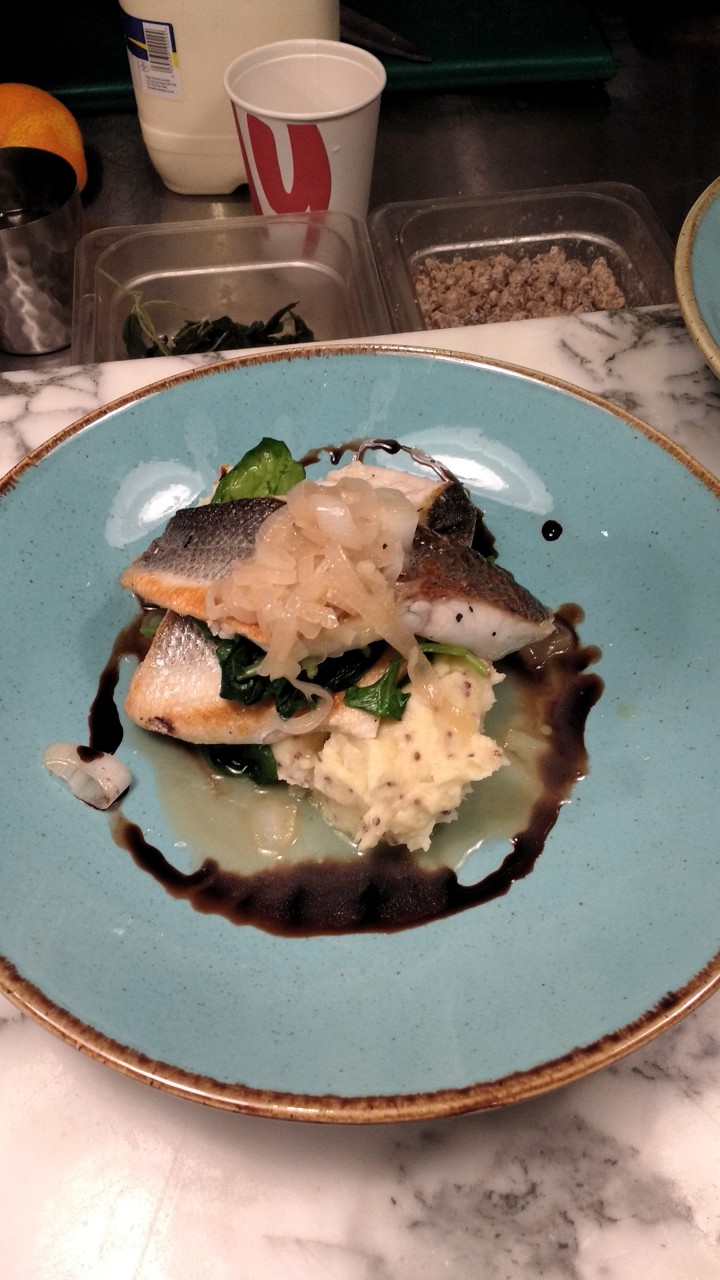 The menu
The starter list for the Christmas menu at Spaghetti House would not lack a soup. Not only is this a classic on any winter menu in London, but it would also be a shame to miss the opportunity to make a star out of one of the many comforting Italian options for soup. In fact, Achille serves a wonderful crema di ceci e castagne (chickpeas and chestnut vellutée) served with porcini mushroom crutons. This dish was so successful that we all called Achille to the table asking for a secret ingredient – but apart from a touch of rosemary oil to serve, this was a very simple recipe. There really is no secret to good Italian cooking, apart from the love for serving to guests the best possible combination of ingredients.

After the glorious soup, the mains were a choice amongst beef medallions with sautéed potatoes and mushroom and porcini tortelloni. After the branzino, I could not possibly go for another secondo, so I went for the tortelloni, and I did not regret it. There is no other way to serve stuffed pasta than with a butter and sage sauce. In this one, the lemon zest helped to bring out the flavours of the filling.

When the dessert made an entrance, it was a beautiful trio of classics. And again, like all the classics Achille cooked for us, they had an English twist to them. The apple sbriciolata, for example, was an Italian version of the apple crumble. The panettone was toasted and served with a paste of winter berries on top, a sweet bruschetta that took out the word traditional from the panettone tray. And finally my all-time favourite, Tiramisú, was the perfect combination of flavours, made with Amaretto instead of the usual Marsala, and with a rather cool surprise on the top, a leaf or peppermint. 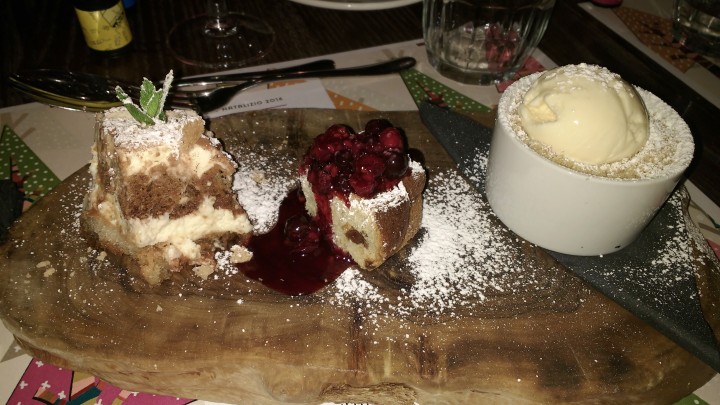 Does this sound way too Italian for your Christmas expectations? Worry not! Spaghetti House also offer a more traditional menu, which includes liver pate as a starter, Turkey as a main and of course, Christmas pudding with brandy sauce for dessert.
The Spaghetti House Christmas menu will be available from 21st November to 24th December. You can choose to have a two courses meal at £16.95 or a three course meal at £19.95, with the option of including a half-litre of wine to the three course menu for just £10 more.
Should you book before 28th October, you’ll be welcomed with a complimentary Prosecco DOC Ca’ del Console glass.
Follow @blenderbasil