Nothing sets off the festive spirit and signals the approach of Christmas quite like mince pies, and that’s what we learned to make with Master Pâtissier Eric Lanlard at Cake Boy in order to celebrate the launch of Meantime‘s latest limited edition beer in The Pilot Series: Cake Boy Hazelnut Ale.

We found Eric Lanlard’s boutique patisserie by the river near Wandsworth Town on an evening in December, which, in London, means that it had been pitch black for several hours already. A step into the patisserie brought us into a different world, where the sofas were as colourful as the macarons. We sipped a glass of Meantime’s Cake Boy Hazelnut Ale as we stared at the mini Christmas trees and chocolate baubles on the counter. Fairy lights twinkled in the background – yes, it’s Christmas.

The nutty and smooth dark ale was created with Christmas in mind. But more than that, it is the spirit of experimentation that led Meantime’s Brewmaster Ciaran Giblin to incorporate hazelnut, an ingredient from baking and festive desserts, into an ale. The desire to create something exciting, different and unexpected sits at the heart of Meantime’s Pilot Series: 26 limited edition beers of which Cake Boy Hazelnut Ale is the latest addition.

It is, again, the spirit of experimentation that led Eric to incorporate the ale into these special mince pies. We soon donned aprons with the pink Cake Boy logo to find out how to make them. We gleamed a few top tips from the Master Pâtissier throughout the evening.

Armed with these tips and Eric’s guidance, we had a stab at making our own hazelnut ale mince pies… 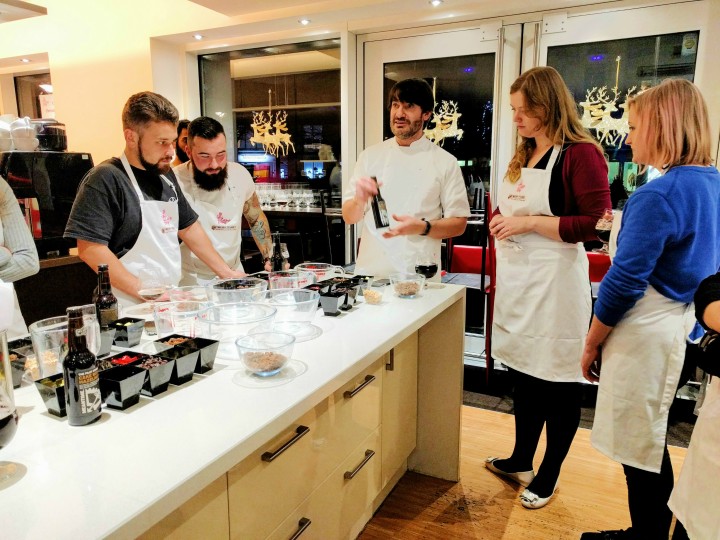 First we took a large mixing bowl, poured in the sultanas, raisins, cherries, mixed peels and hazelnut and gave it a good stir.

Then we placed the butter, the spices and the dark muscovado sugar into a saucepan. Then we measured 150ml of hazelnut ale (different from the full recipe below as we were making a smaller batch) and added this to the pan, being careful to pour down the side to avoid bubbles. 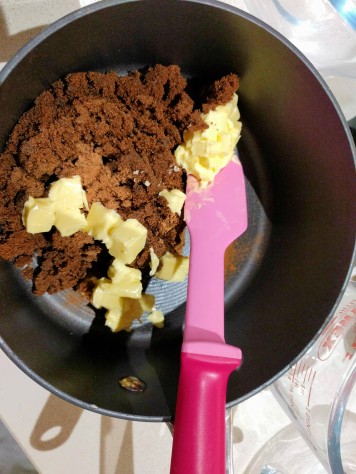 We heated the pan on low heat, constantly stirring to melt the sugar and butter and being careful not to bring it to a boil. Once all the butter and sugar has melted and dissolved, we poured the liquid into our mixing bowl.

Normally, you’d leave the mincemeat to soak for at least 48 hours, but we didn’t have quite so much time, so when spooning the mincemeat into the shortcrust pastry, we tried to strain off any excess fluid.

We filled the shortcrust pastry level to the brim and patted down the mincemeat, then got ready to work on the puff pastry stars at the top. As per Eric’s tip, we brushed the whole sheet with egg yolk, then pressed down firmly with the star cutter to get those lids done as quickly as possible before the puff pastry melted. 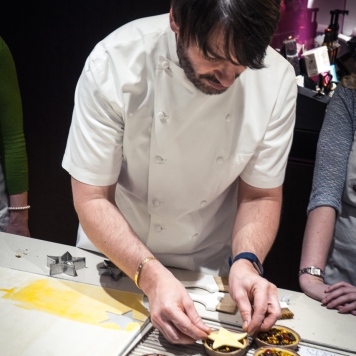 The mince pies went into the oven, then came out looking mouth-watering! (Well, actually these were the ones that Eric made earlier, so of course they’d be good…) One final touch and they were ready to go! 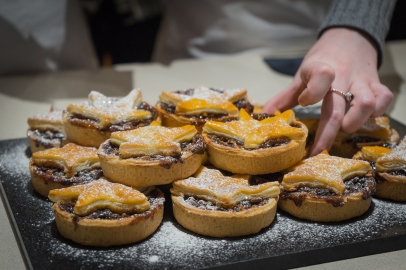 If you’d like to try it yourself, have a look at the full mince pie with hazelnut ale recipe from Eric! As you can see, it’s best to make the mince meat a few days, or even weeks, beforehand, so now’s the time to get those sultanas soaking. Or if you’d like to try it without the baking, see below.

Both the hazelnut ale and mince pies will be available to try and buy at either the Meantime Brewery Tasting Rooms, SE10 0AR or Cake Boy, SW18 1TX until 22nd December.

Those that purchase two bottles of Cake Boy Hazelnut Ale bottles (£2.10 each) will get a mince pie free, while stocks last.

Many thanks to Isaac from Baken for all the nice photos in this post!