One of the most common questions associated with this Chinese recipe is: why is it called three cup chicken? Simply because it’s mainly flavoured with 3 cups: 1 cup of sesame oil, 1 cup of soy sauce and 1 cup of rice wine. That’s the idea anyway! In reality, you don’t want to use a full cup of everything – otherwise it will be far too oily and saThe other important ingredients are ginger, garlic, chili (as always) and, uncommonly for Chinese recipes, basil. Basil is an ingredient introduced when the recipe became popular in Taiwan, and it really adds a little extra flavour to the dish.   You can use your favourite cuts of chicken for this, and many people prefer it with the skin on as it will get crispy when fried. I’m using skinless chicken thighs. This takes very little time to prep and around 20 mins to cook. Will serve 2-3. 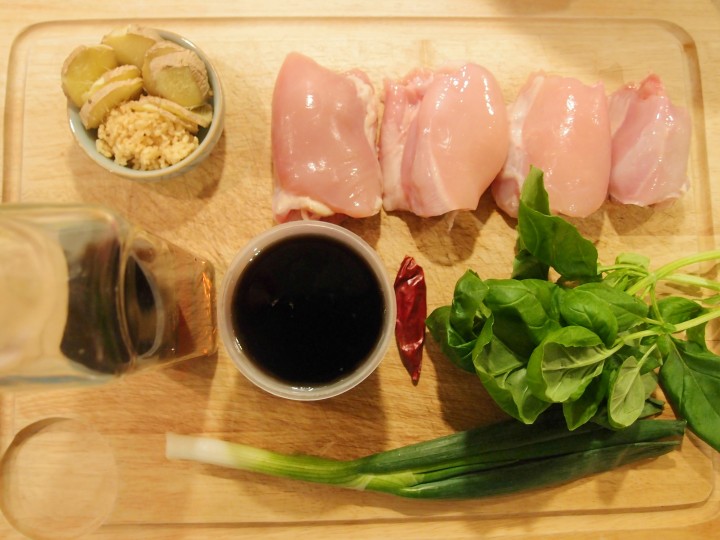 Step 1: Chop the chicken into more bite-sized pieces, around 1 inch across. Separate the whites and greens of the spring onion, chop the whites into 1 inch pieces and chop the greens more finely.

Step 2: Heat a little cooking oil in a pan until sizzling and fry the ginger and chicken until browning on the surface. Remove from the pan and drain from the oil.

Step 3: In a separate pan, add the sesame oil, and once hot, add the fried ginger, chopped garlic, whites of the spring onion and stir fry for 30 seconds. Then add the chicken and chili and stir fry on high heat.

Step 4: Once the chicken looks roughly cooked and the pan in getting dry, which may take 2-3 minutes, add the soy sauce, rice white and sugar and stir well. Turn onto low heat, cover and simmer for 10 minutes, until the juice is nearly gone.

Step 5: Remove the lid, add the greens of the spring onion, the basil and stir, then serve!

It’s such a simple recipe, and very tasty. If you prefer it without the basil, then you can leave it out and it’d have a more traditional, Mainland China taste. What do you think?