When people think about the staple food in China, white rice usually comes to mind, but this is actually not true in Dongbei, the north east of China. Maize (corn) is the traditional staple there, and the most well-known version is a porridge made from maize kernels: Da Zha Zi.

Nutritionally speaking, corn tends to be a little richer than white rice in vitamins, and offers more fiber. To make up for the lower protein content in corn (which is also an issue, if not more so, with rice), this porridge/congee is usually balanced with red kidney beans, and you can also add peanuts to the mix.It’s possible to cook this on a stove, and you’d simply need to soak the red kidney beans and corn for a few hours before use if using the dried versions, then add it to the peanuts to boil on low heat for 2-3 hours. You can also use the non-dried versions, which is easier to find in western supermarkets, so you don’t need to cook it for quite so long. The pressure cooker is optional, but the non-dried kidney beans will become too soft if you put it in the pressure cooker, so it’s best to add this separately. 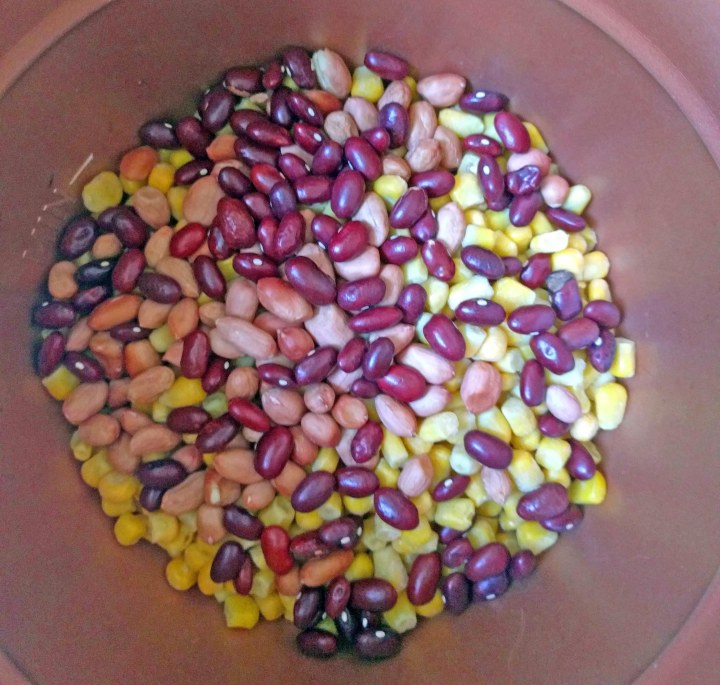 Step 1: Add the corn and peanuts to a pot, then add a pinch of salt and roughly 4 cups of water. If using dried red kidney beans then soak these and add these in too at this stage. Either place this in an electric pressure cooker for 15 minutes or bring to a boil then simmer on low heat for 45 minutes.

Step 2: Add in the red kidney beans if using the canned version and boil for a further 15 minutes, taking off the lid if you want the consistency to become thicker. Be careful and stir/check often if you are doing this. Turn off the heat and it’s ready to serve with your favourite meal!

The sweetness of this staple food balances the heavier flavours of other northern Chinese food really well, don’t you think?